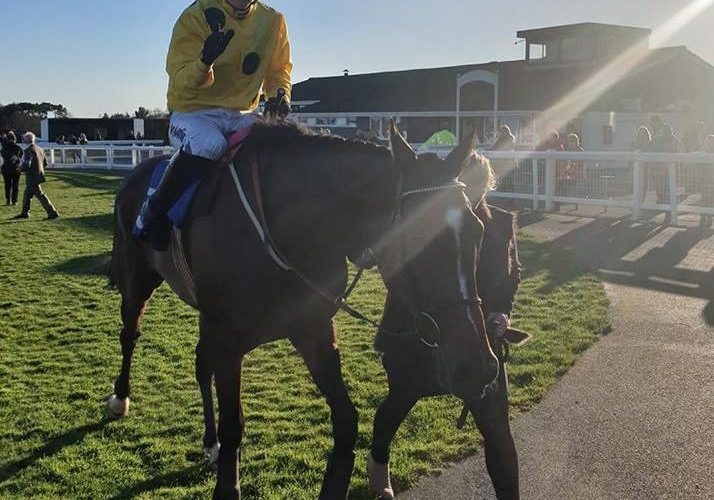 It was great to see Tudors Treasure win for the second time at Exeter on Sunday. He has been a bit unlucky in falling a couple of times over fences because he’s generally a good jumper, and we’d hoped he would run well in this 2 mile 3 furlong handicap chase. Under Tom O’Brien he jumped well and outstayed the favourite to the delight of his owners the Four Seasons Partnership. This was his second win, he’s also a hurdle winner at Ffos Las.

Beltor won on his return from injury at Taunton but disappointed next time out when I don’t think he was quite right. He looks to be back on track though, he finished fourth under top weight in a competitive hurdle at Ludlow last week. Now he is back to form we are very much looking forward to his next run.

We work closely with our local racecourses – last week we welcomed around 30 Chepstow and Ffos Las Racecourse annual members for a stable visit. It was good to be able to demonstrate some of our new facilities including the lunging pen and the new stables. We also watched Mere Anarchy and Comeonthebull working on the carpet fibre gallop.

With no scheduled runners this week we’ve been kept busy breaking in a couple of new arrivals, these include a Nathaniel filly bred down the road at Oakgrove Stud.

Looking ahead Push The Tempo is being prepared for a handicap hurdle at Aintree’s Grand National meeting. He won three on the spin last summer and ran a nice race to finish a close third on his return from a break at Plumpton earlier this month.