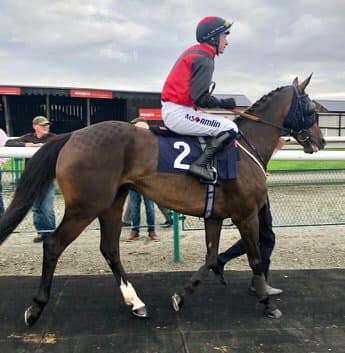 Toshima picked up his third win of the summer on Thursday, winning a 2 mile 4 furlong novices hurdle at Sedgefield. Since his wind operation earlier this year he’s grown in confidence and we’re so pleased to see him doing so well. He does have another entry for a similar race at Sedgefield this coming Thursday and we’ll make a decision nearer the time.

He’s a versatile horse, having won on the flat at Ffos Las in July, and now having won over 2 miles and 2 1/2 over hurdles. We made the long trip to Sedgefield because the race looked winnable, and he definitely made it worth it! He was more experienced than some of his rivals, he jumped pretty well and it was really pleasing to see him going away at the end. He’s  improving and he’s really enjoying his racing.

The Caller (pictured) also made the 6 hour journey to Sedgefield, and we almost came home with a double because he ran another really good race to finish a length second in the staying novices handicap chase. He was a cheap purchase but he’s a nice horse, finishing third and second on his first 2 runs for us. He’s a real stayer, but he can run over hurdles or fences so he’s versatile too and is another to keep an eye on.