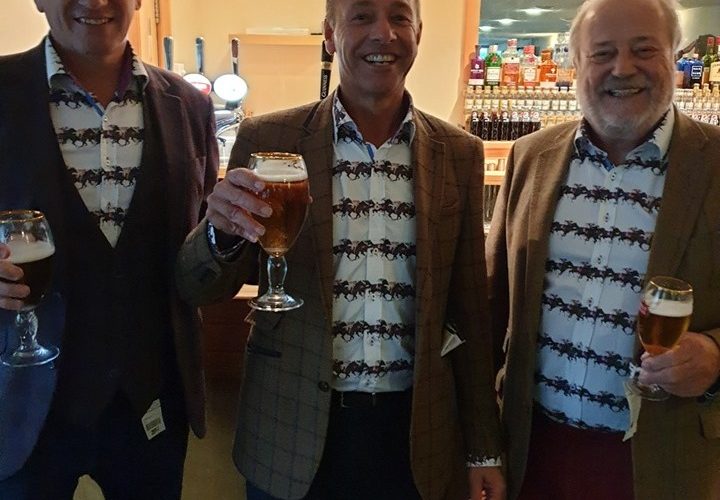 Congratulations to owners Threes Company (pictured!), their Espresso Freddo won well at Bath yesterday. Under Dane O’Neill he was slow out of the stalls but made up the ground and went on to win by an easy 4 lengths, easing down. It has been a long time since he last won, and you wonder why he hasn’t won sooner when he can do that! The softer ground helped, he enjoyed that, and he’ll probably run again next week under a penalty.

Secondo is entered at Windsor on Monday in a 6 furlong amateur riders handicap. Our stable amateur Craig Dowson will ride.

We’ve got several jumpers ready to go now, and Beltor is being aimed at the Welsh Champion Hurdle at Ffos Las on 19th October. First Destination, also owned by Alison Mossop, may also run on the same card.

Tudors Treasure, twice a winner last season, is back in work and looking great. Toshima has had a bit of a break after a busy and productive season, but seems fresh and well and may run again.

The Caller finished 3rd at Newton Abbot last week, staying on nicely after being outpaced earlier on. Our thorough stayer heads to the Durham National at Sedgefield next.

Balkinstown hasn’t had the best of luck this year, hopefully he’ll have his day soon too as he was a winner last year.

Over the summer we bought a few nice horses for the jump season and these are also almost ready to run. A couple of these are for sale. Please give me a call if you’d like details!