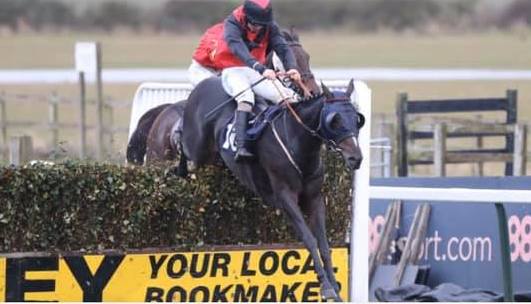 It’s fantastic when a plan comes together, and The Caller (pictured) put in a lovely jumping and staying performance to take the Durham National at Sedgefield on Sunday!

The Caller was a bargain purchase for owner Colleen Ford-Ellis at just £6000 from Ascot Sales in the summer. He showed promise on his first three runs for us, finishing third, second and third, proving himself to be a real stayer.

The soft ground and the marathon trip at Sedgefield played to his advantage, and under a lovely low weight and a great ride by Sean Bowen he travelled beautifully and finished strongly to take the almost £19k first prize for the Sedgefield feature.

He’s come out of the race in good shape and will target other similar regional Nationals and valuable staying races.

Espresso Freddo very nearly gave us a second winner of the week, coming up against a really determined rival to go down just a neck to the favourite at Windsor on Monday. He’s been a revelation since the ground went soft and this was another very good performance.

I was really pleased with Beltor’s run in the Welsh Champion Hurdle on Saturday at Ffos Las. He ran out of steam after being much too keen in the early stages on his first run of the season and I blame myself for putting the visor on him which didn’t help. I think he’s got a decent race in him this season.

First Destination didn’t run at Ffos Las because the ground was heavy, she will go to Worcester on Wednesday for a mares novice hurdle, Tom O’Brien rides.