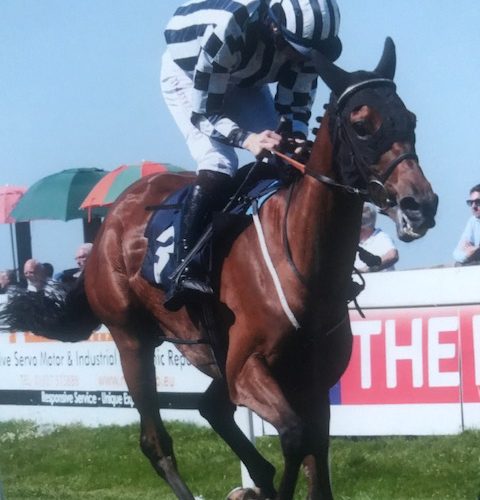 Push The Tempo (pictured) heads for the Grade 3 Merseyrail Handicap Hurdle over 2 1/2 miles at Aintree on Friday. Any race at the Grand National meeting is going to be ultra competitive but he’s in great form, he’ll have a nice low weight and he ran really well to finish 3rd in his recent prep race. Ciaran Gethings will ride as Tom O’Brien will be riding for Philip Hobbs. Ciaran has ridden the horse before, they won a bumper together at Worcester last June.

It’s going to be a busy few days. Awaywiththeblues is entered at Chepstow on Saturday in the Sid Hooper On Course Bookmaker Novices’ Handicap Hurdle. It’ll be his first handicap start.

We’ve got 2 entered at Ffos Las on Sunday too. Mere Anarchy is entered in a handicap hurdle, he’s been placed several times recently and he can be frustrating, but he has ability if things go his way and he’s a three time winner.

The mare First Destination holds an entry in a novices’ hurdle. She has been off the track since August 2017 when she won a bumper at Market Rasen. for her owner Alison Mossop.

Our stable amateur Craig Dowson followed up his Oman win in the Fegentri amateur riders series with a fifth place finish in Germany this week.